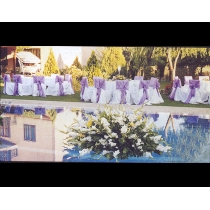 Services of flower decoration for wedding


Typically, a florist will organize flowers by season and holiday. Flowers have various different meanings in different cultures. The holidays and events for which flowers are used vary. Poppies are used to remember fallen soldiers only in Great Britain and the Commonwealth countries. The cultural meaning of colors also strongly affects the choice and use of flowers. People often prefer flowers that are associated with their ethnic group or country, and various colors may have special meanings of luck ordeath or love or other basic human traits. To some, a flower such as a red rose might mean love, but to others it might be considered indecent or simply puzzling. The vastly divergent views on the color white can also lead to major flower issues. While white represents death in many Asian cultures, it is simultaneously a symbol of purity and innocence in many European and American cultures. Such differences can lead to difficult issues when a bouquet of white lilies, for example, is delivered
Contact the seller
Services on wedding flower decoration

We recommend to see
Services on wedding flower decoration
Manufacturing of jewelry for wedding cars
Send inquiry
Buy
Contact supplier
Your question has been sent successfully
Consultants of the shop typically answer questions during the day.