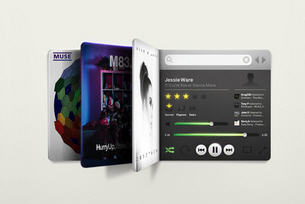 
Photography (see section below for etymology) is the art, science and practice of creating durable images by recording light or other electromagnetic radiation, either chemically by means of a light-sensitive material such as photographic film, or electronically by means of an image sensor.[1] Typically, a lens is used to focus the light reflected or emitted from objects into a real image on the light-sensitive surface inside a camera during a timed exposure. The result in an electronic image sensor is anelectrical charge at each pixel, which is electronically processed and stored in a digital image file for subsequent display or processing.

The result in a photographic emulsion is an invisible latent image, which is later chemically developed into a visible image, either negative or positive depending on the purpose of the photographic material and the method of processing. A negative image on film is traditionally used to photographically create a positive image on a paper base, known as a print, either by using an enlarger or by contact printing.

We recommend to see
Services photographic for printed booklets
Photo services
Services of a photographer
Send inquiry
Buy
Contact supplier
Your question has been sent successfully
Consultants of the shop typically answer questions during the day.