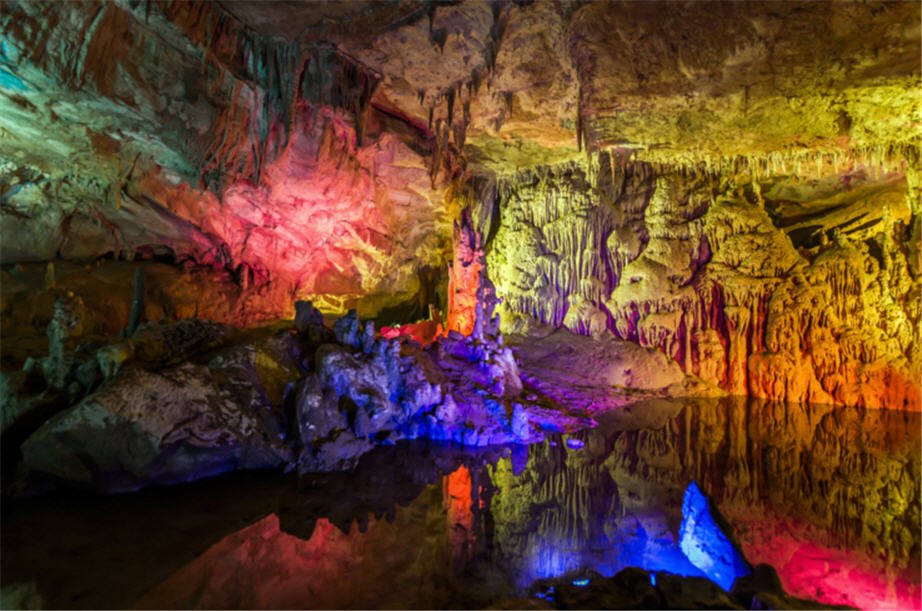 Karst cave Sataplia and Prometheus Cave - two of the most interesting and attractive tourist sites within walking distance from the Georgian city of Kutaisi. Sataplia, Kutaisi, Georgia

Karst cave Sataplia and Prometheus Cave - two of the most interesting and attractive tourist sites within walking distance from the Georgian city of Kutaisi.

Sataplia Cave was discovered in 1925 by local historian Petre Chabukiani, and in 1934 here in petrified site near the caves were discovered dinosaur footprints printed in large stones. Sataplia in Georgian means "honey." The cave was so named because of its entry into the rock, in the crevices of limestone cornice, once had a lot of beehives. Who of them stayed only one.
Sataplia Cave is just 7 km away. Kutaisi

The cave entrance is located at an altitude of 450 m., Visit the cave are only allowed in an organized group tours.
Sataplia Cave has a length of about 900 m (length of tour route - 300 m). The temperature is stable at 14 degrees Celsius. At 100 meters from the entrance hall is a dome shaped passages and halls of the cave rich variety of sinter and crystal structures of various shapes. Inside the cave stream flows, giving rise Ogaskuri River on the south slope of Mount Sataplia.

The standard tour lasts approximately one and a half hours and includes three parts: the first will lead you in a special pavilion to look at the pride of Sataplia Nature Reserve - dinosaur tracks discovered here in the study of caves. Footprints are clearly visible on the stone, but the size of it was likely to medium-sized dinosaur or calf. Regarding the presence of dinosaur tracks along the trails of the reserve, leading to the caves, the mannequins are dinosaurs, which are especially popular with children.

Guided tour of the cave is well equipped for the visitors laid bridges and stairs with a handrail, all stalactites and stalagmites are illuminated with dozens of spotlights, dynamically changing the color to blue, then purple, then red, yellow or green.
In addition to the pavilion with dinosaur tracks and the cave also offers up the hill, where is equipped with a special viewing platform in the form of a glass bridge. The truth is there are not allowed in bad weather for safety reasons.

Contact the seller
Karst cave Sataplia and Prometheus Cave - two of the most interesting and attractive tourist sites within walking distance from the Georgian city of Kutaisi. Sataplia, Kutaisi, Georgia

We recommend to see
Treatment in salt cave
Send inquiry
Buy
Contact supplier
Your question has been sent successfully
Consultants of the shop typically answer questions during the day.