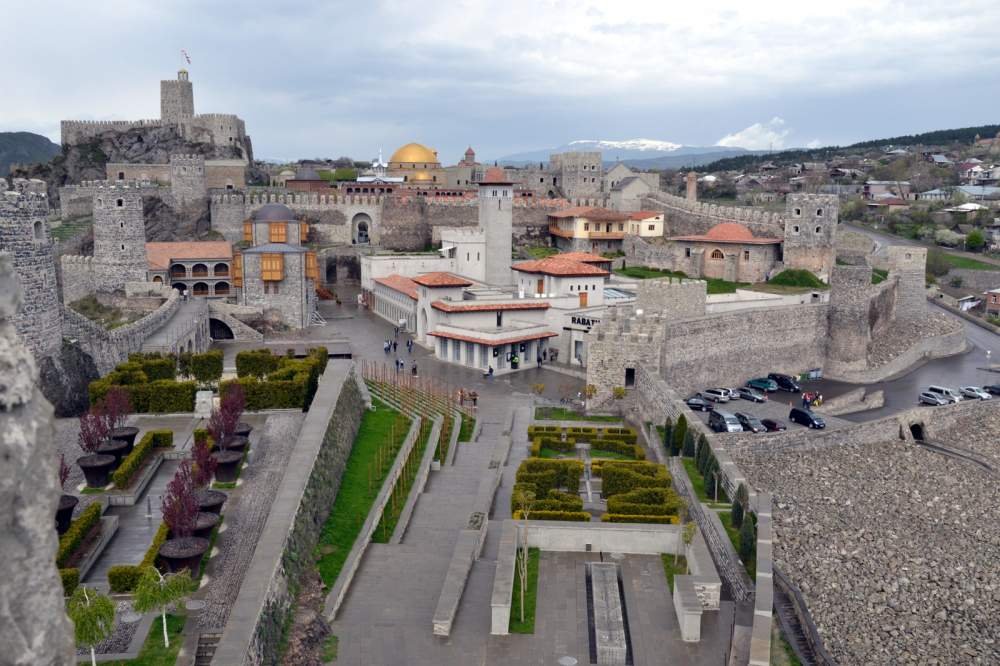 On a small hill, on the shore of the river quiet Potskhovi, stands the main attraction of the town of Akhaltsikhe - old stone fortress Rabat. Its name comes from Arabic and means "fortified place". It is located on the western edge and is visible from almost anywhere in the city. Built in the XIII century, this military building has seen many in my time. The fortress was repeatedly destroyed, it was often under siege, and eventually absorbed the traces of different cultures and religions. In 2012, it hosted a large-scale reconstruction, followed by Rabat fortress in Akhaltsikhe town appeared in the city. However, it was not only a historical monument, but also a real cultural center of the city. Within the walls of the fortress is the church, a mosque, a synagogue, a small park, historical museum, various shops, a hotel and even a registrar.

Rabat fortress history goes back centuries, and no one can say exactly when will the first fortification. It is known that in the XII century princely family Jakeli built the first real fortress, and it became their family residence for 300 years. Interestingly, when they built this fortress, it became known as "Akhaltsikhe", which translated means "New Castle" .This name and to this day has kept the city that stretches from its walls.

In 1393 Rabat fortress was almost completely destroyed by the army of Tamerlane, who led his troops from the conquered Iran in the land of the Golden Horde from the Caspian Sea. The city and the fort have been restored, but 100 years later, in 1486 Akhaltsikhe again was destroyed by the Mongolian Khan Jakub. However, the strategic importance and convenient trade routes contributed to the rapid recovery of the city.

In 1578, the city of Akhaltsikhe was seized by the troops of the Ottoman Empire. They rebuilt and fortified castle, and gradually spread is known as "Rabat". This term in Arab countries means an area adjacent to the fortress and surrounded by an additional defensive wall. But here the word has become the symbol of the fortress.

In 1810 the castle was besieged by the troops of Rabat of the Russian Empire, but this attempt failed capture of the fortress. Only in 1828, during the Russian-Turkish war, the combined forces of the Russian Empire and in the fierce assault of Georgia captured the fortress. This event was depicted in a painting by Russian artist Sukhodolskiy "Storming fortress Akhaltsikh August 15, 1828". Later, the Ottoman Empire several attempts to regain control of this strategic target, but they all failed.

After the establishment of peace in this region of Rabat fortress lost its strategic importance and soon began to deteriorate without proper care. In XX century fortifications quality of this outpost did not matter, and because of strained diplomatic relations between the USSR and Turkey, the area became a closed and unpopular. It was only after the collapse of the Soviet Union renewed interest in Akhaltsikhe and its main attractions. In 2011 it began an extensive restoration of the fortress of Rabat, and in August 2012 it was open to all comers, take a worthy place on the tourist map of Georgia.

Today, the fortress of Rabat is a true cultural and historical complex on an area of ​​about seven hectares. The territory of the fortress is divided into lower and upper part of the modern historical. At the bottom there are shops, a cafe, restaurant and hotel. The upper part includes a mosque Ahmediya (XVIII century), the Orthodox Church (XIX century), the ancestral castle Jakeli, as well as a historical museum. The exposition of the museum presents the ancient history of South Georgia: Stoneware Neolithic, bronze axes found in these parts, household items primitive age, and other artifacts. Taking photographs in the museum is prohibited.

In addition, the fortress Rabat boasts excellent visibility platforms: on its walls rise four towers, which can be reached by a spiral staircase. Each of them offer excellent views of the Akhaltsikhe and its surroundings, and standing here you can easily imagine yourself guard, look out for the approaching enemy. But if this will seem a little, then you can climb on the roof of the citadel in the western part of the fortress, which offers the best view.
Переводчик Google для бизнеса –Инструменты переводчикаПереводчик сайтовСлужба "Анализ рынков"