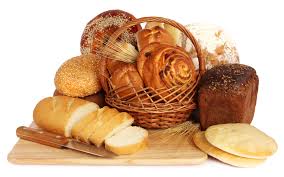 In stock
Reconfirm the price with seller
Seller
Nili, Company
Georgia, Tbilisi
(View map)
+995
Display phones
Call
Products of other enterprises
Technical characteristics
Description
Bread is the staple food in Europe, European-derived cultures such as the Americas, the Middle East, North Africa and Southern Africa, as opposed to East Asia whose staple is rice. Bread is usually made from a wheat-flour dough that is cultured with yeast, allowed to rise, and finally baked in an oven. Owing to its high levels of gluten (which give the dough sponginess and elasticity), common wheat (also known as bread wheat) is the most common grain used for the preparation of bread.

Bread is also made from the flour of other wheat species (including durum, spelt and emmer), rye, barley, maize (corn), and oats, usually, but not always, in combination with wheat flour. Spelt bread (Dinkelbrot) continues to be widely consumed in Germany, and emmer bread was a staple food in ancient Egypt. Canadian bread is known for its heartier consistency due to high protein levels in Canadian
Contact the seller
Dika bread