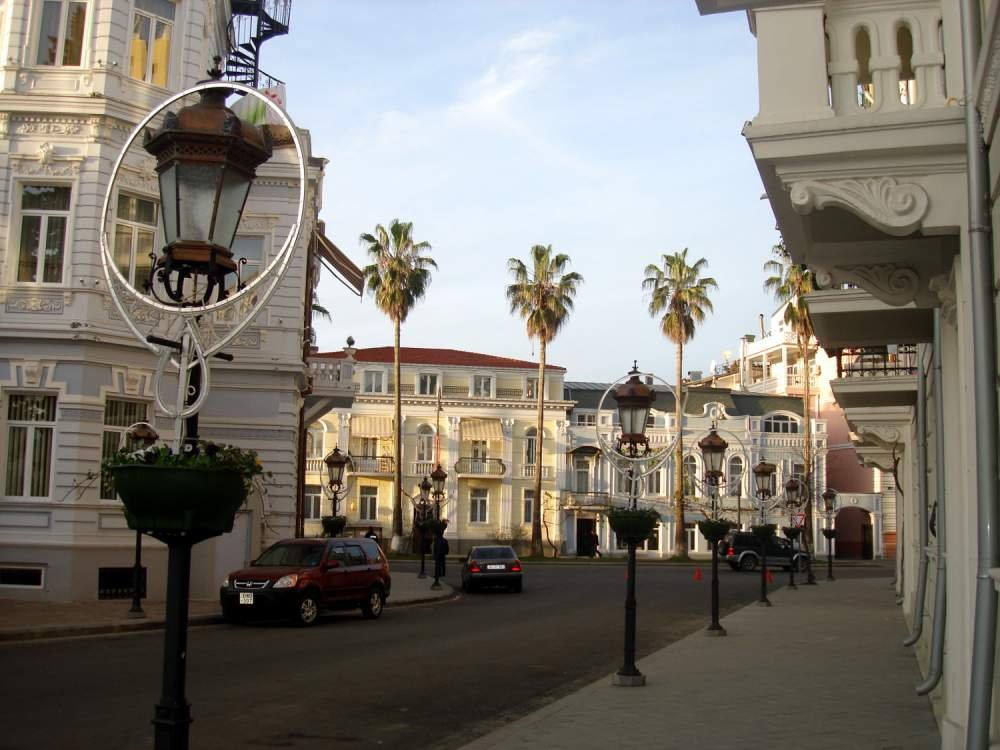 Batumi- city and port in Georgia, on the Black Sea coast and capital of Adjara main tourist center of modern Georgia

Batumi (Georgia. ბათუმი [Batumi], until 1936 - Batum [2]) - city and port in Georgia, on the Black Sea coast and capital of Adjara main tourist center of modern Georgia.
Today Batumi is an important cultural, economic and tourist center of Georgia. It is famous for the historic center and tourist area with modern skyscrapers.

The city is located on the Black Sea coast, in the lowlands Kahaberskoy, 2-3 meters above sea level. The shape resembles a crescent plain that stretches for 7 km from north to west. The main part of Batumi Batumi, adjacent to the bay in the northern part of Kahabrskoy lowlands along rivers and Bartshana Korolistskali.
The basis of the name suggests Swann. Baht - "stone". The settlement on the site of the town exists, seems to be a very long time: The first mention of Batumi (Batus) occurs in the Greek philosopher IV century BC. e. Aristotle. Author Pliny the Elder, I century AD. e., refers to the Greek port called Βαθύς - Batus - "deep", which is a reinterpretation of the local name. In the Middle Ages the city was called Bat, 1878 Batum, 1936 Batumi

In the early Middle Ages it was part of Lazika, later united Georgian state, then ruled by princes Megrelian Odishi Principality. In the XIII and XIV centuries the town was ruled by the rulers of Guria. In 1547 baht was conquered by the Ottomans, who held the town for nearly 300 years. In 1878 the city was liberated associate Russian-Georgian army became part of Russia on the Berlin peace treaty between the Russian and Ottoman empires, and was called Batumi.
In the years 1878-1886 was a free port, which played an important role in the development of the city. In 1936 it was renamed in Batumi.
The first information about Batumi found in the Greek philosopher of IV century BC Aristotle, which he referred to as the Colchian city Batus. Under the same name the city was known to the Roman writer Pliny the Elder and the Greek geographer Flavius ​​Arrian. Batus word in Latin means depth. Among the cities of Georgia and the Black Sea port of Batumi is the deepest since the Sukhumi.

Carried out in the suburbs of Batumi archaeological excavations have established that the population lived in Batumi in the I-II millennium BC. e. and had developed trade ties with its neighbors. Batumi was the heart of ancient fortress located in Tamara pillar, which is the cultural and economic center of the river valley Korolistskali.

Contact the seller
Batumi- city and port in Georgia, on the Black Sea coast and capital of Adjara main tourist center of modern Georgia