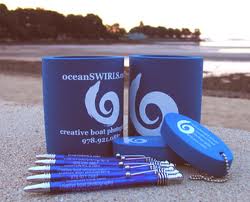 
Radio advertising is a form of advertising via the medium of radio. Radio advertisements are broadcast as radio waves to the air from a transmitter to an antenna and a thus to a receiving device. Airtime is purchased from a station or network in exchange for airing the commercials. While radio has the limitation of being restricted to sound, proponents of radio advertising often cite this as an advantage. Radio is an expanding medium that can be found not only on air, but also online. According to Arbitron, radio has approximately 241.6 million weekly listeners, or more than 93 percent of the U.S. population.Online advertisingOnline advertising is a form of promotion that uses the Internet and World Wide Web for the expressed purpose of delivering marketing messages to attract customers. Online ads are delivered by an ad server. Examples of online advertising include contextual ads that appear on search engine results pages, banner ads, in text ads, Rich Media Ads, Social network advertising, online classified advertising, advertising networks and e-mail marketing, including e-mail spam.New mediaTechnological development and economic globalization favors the emergence of new communication channels and new techniques of commercial messaging.Product placementsCovert advertising, is when a product or brand is embedded in entertainment and media. For example, in a film, the main character can use an item or other of a definite brand, as in the movie Minority Report, where Tom Cruise's character John Anderton owns a phone with the Nokia logo clearly written in the top corner, or his watch engraved with the Bulgari logo. Another example of advertising in film is in I, Robot, where main character played by Will Smith mentions his Converse shoes several times, calling them "classics", because the film is set far in the future. I, Robot and Spaceballs also showcase futuristic cars with the Audi and Mercedes-Benz logos clearly displayed on the front of the vehicles. Cadillac chose to advertise in the movie The Matrix Reloaded, which as a result contained many scenes in which Cadillac cars were used. Similarly, product placement for Omega Watches, Ford, VAIO, BMW and Aston Martin cars are featured in recent James Bond films, most notably Casino Royale. In "Fantastic Four: Rise of the Silver Surfer", the main transport vehicle shows a large Dodge logo on the front. Blade Runner includes some of the most obvious product placement; the whole film stops to show a Coca-Cola billboard.Press advertisingPress advertising describes advertising in a printed medium such as a newspaper, magazine, or trade journal. This encompasses everything from media with a very broad readership base, such as a major national newspaper or magazine, to more narrowly targeted media such as local newspapers and trade journals on very specialized topics. A form of press advertising is classified advertising, which allows private individuals or companies to purchase a small, narrowly targeted ad for a low fee advertising a product or service. Another form of press advertising is the Display Ad, which is a larger ad (can include art) that typically run in an article section of a newspaper.Billboard advertisingBillboards are large structures located in public places which display advertisements to passing pedestrians and motorists. Most often, they are located on main roads with a large amount of passing motor and pedestrian traffic; however, they can be placed in any location with large amounts of viewers, such as on mass transit vehicles and in stations, in shopping malls or office buildings, and in stadiums. The RedEye newspaper advertised to its target market at North Avenue Beachwith a sailboat billboard on Lake Michigan. Mobile billboard advertisingMobile billboards are generally vehicle mounted billboards or digital screens. These can be on dedicated vehicles built solely for carrying advertisements along routes preselected by clients, they can also be specially equipped cargo trucks or, in some cases, large banners strewn from planes. The billboards are often lighted; some being backlit, and others employing spotlights. Some billboard displays are static, while others change; for example, continuously or periodically rotating among a set of advertisements. Mobile displays are used for various situations in metropolitan areas throughout the world, including: Target advertising, One-day, and long-term campaigns, Conventions, Sporting events, Store openings and similar promotional events, and Big advertisements from smaller companies.In-store advertisingIn-store advertising is any advertisement placed in a retail store. It includes placement of a product in visible locations in a store, such as at eye level, at the ends of aisles and near checkout counters (aka POP - Point of Purchase display), eye-catching displays promoting a specific product, and advertisements in such places as shopping carts and in-store video displays.Coffee cup advertisingCoffee cup advertising is any advertisement placed upon a coffee cup that is distributed out of an office, café, or drive-through coffee shop. This form of advertising was first popularized in Australia, and has begun growing in popularity in the United States, India, and parts of the Middle East.
Contact the seller
Advertising product printing